In a recent posting on the Mustang Forums a fellow asked about the FuelMaxx "performance chips" being sold on eBay, he was excited by the prospect of adding 30 HP and 4 MPG with just a $22 investment and was seeking advice from his fellow forum members as to the value of the unit--to their distinct credit the forum responded with a unanimous and overwhelming combination of LOL, OMG, and a couple of WTFs?

Having not debunked anything like this in more that a few years I said "What he heck?" and ordered one of the "Maximizer Modules". My first reaction upon seeing the eBay posting had been that is was one of what was once, in the early days of EFI, known as a "resistor trick"--upon receiving and analyzing the "module" I find no disappointment in my initial assessment.

The resistor trick worked by inserting a resistor in series with the intake air temperature (IAT) sensor, which made its apparent resistance higher, which in turn tricked the Engine Control Unit (ECU) into believing the intake air was cooler that it really was. This caused the ECU to add fuel and timing--which in the days of auto makers' solution to the EPA fuel economy ratings being to make the engine run lean--actually could add some horsepower. It also generally drove fuel economy down.

The FuelMaxx applies the resistor in parallel which confused me at first, more about this below.


Inside the FuelMaxx (a virtual view for now):

The module is a rather small plastic "project" box, approximately 2" x 1-1/2" x 7/8", it weighs a couple ounces; mostly because of the potting compound used to protect the "sensitive components" of the "internal electronics" from prying eyes--it is rather effective at that. The box has two wires of 18 gauge or so; one red one black; and a small bit of double sided tape on the back so that it might be "mounted" in the engine compartment. It is provided with a short bit of split wire loom, two 3M wire taps, and a nylon wire tie.


So that those with only modest interest don't have to read this whole entry, here's the bottom line.

The FuelMaxx device is a 3¢ 22kΩ resistor in a 15¢ plastic project box, the potting material probably cost more than the resistor, box, and wire.

Per the included instructions it is installed in parallel with the Intake Air Temperature (IAT) sensor. The IAT sensor is a negative temperature coefficient (NTC) thermistor, meaning that as the air temperature increases the electrical resistance of the IAT decreases. At 68°F it's resistance is 37.30kΩ and at 86°F it is 24.27kΩ.

By wiring the FuelMaxx 22kΩ resistor in parallel with the IAT its effective resistance is reduced as shown in the following table, and according to this formula: 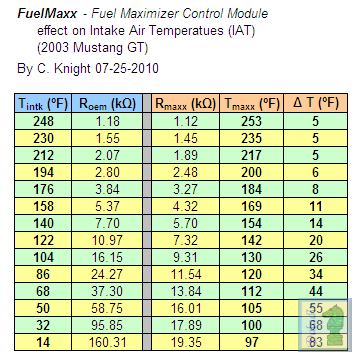 The reduction in effective resistance makes the PCM (Powertrain Control Module) believe the incoming air is warmer than it really is, which as I said above confused me at first. However it came to me that by telling the PCM the intake air is warmer it will inject less fuel. While the adaptive learning system will counteract this to some extent in closed-loop mode, this could perhaps support the increased fuel economy claim (I said "perhaps", it [the FuelMaxx] is still a rip-off and a kludge).

Thinking it through further I realised that most modern engines run a bit rich in open-loop mode. Emissions standards do not apply to WOT operation, and in order to run the donkey-piss 87 octane fuel the Feds have imposed upon us having the mix rich provides a hedge against detonation. Most (maybe all) "canned" tunes for the Mustangs lean out the commanded AFR in the Stabilised Open Loop Fuel Table. This could (perhaps) support their increased performance claim--however +30HP is a crock. 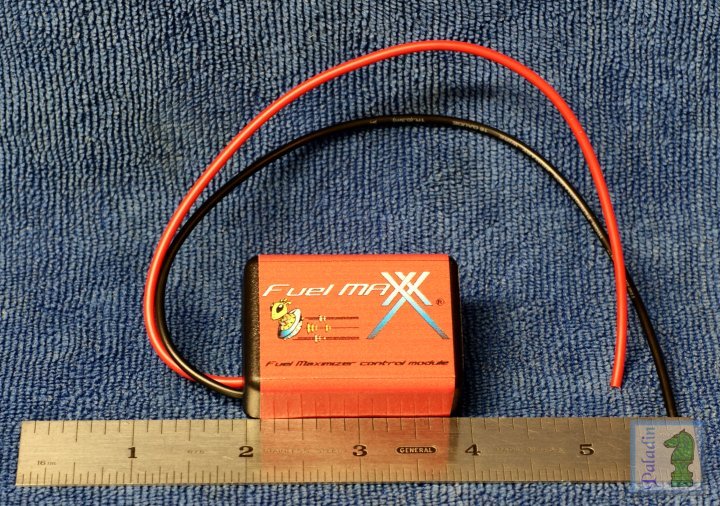 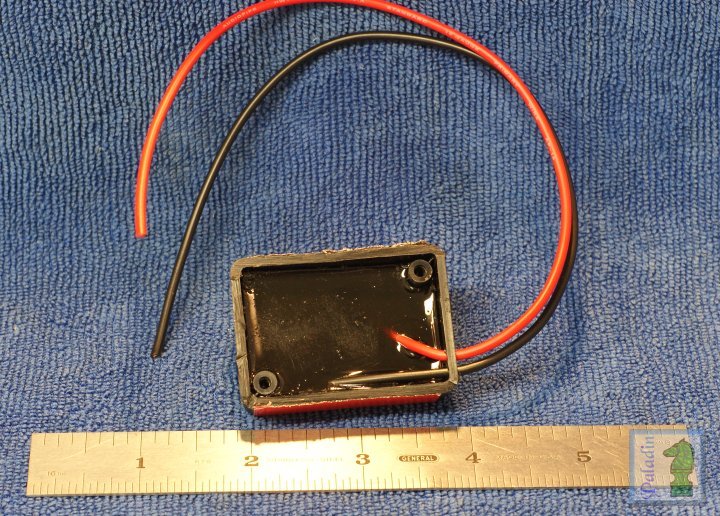 While I have not yet taken on the task of releasing the magic smoke from it's confines, I first performed simple resistance and capacitance tests.

The device's resistance and capacitance are 21.83kΩ and 0.000nF, respectively: 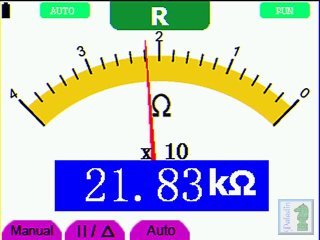 Both of which fully convinced me that what's inside is no more than a 22kΩ resistor. Nonetheless to go a step further, and assure the faithful that they did indeed get screwed, I performed a network analysis bode plot to determine the device's transfer function.

A bode plot is produced by passing an AC signal though the device under test (DUT) and examining the relationships (generally amplitude and phase shift) of the input and output signals.

To perform this test I used the network analysis capability of Velleman's PCSU1000 oscilloscope, and their PCGU1000 function generator. These are both USB connected PC-based instruments, that can be fully controlled by the host computer. When paired up and controlled by Velleman's PCLab2000 software it is possible to perform a completely automated network analysis--this capability is WFC for a couple of instruments that cost less than $600 for the pair!

This is the instrument and DUT (Device Under Test, aka FuelMaxx) configuration: 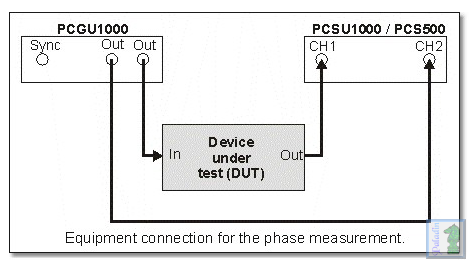 Here's what I found when scanning the device's response form 10Hz to 10kHz: 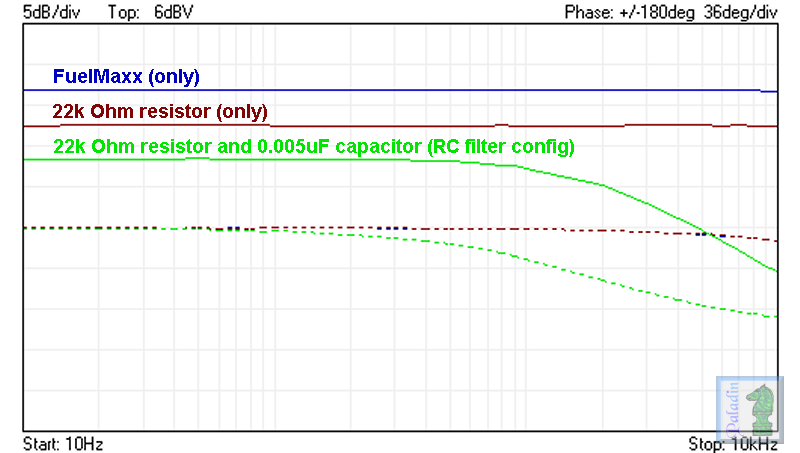 The blue trace is the FuelMaxx's frequency response, that it is a flat line indicates a purely resistive load. No other electrical component would display a straight line in this test.

The green trace is the that of a simple RC (Resistor/Capacitor) filter using the 22kΩ resistor and a 0.005μF capacitor. I did this to illustrate that if there were any other electronic components inside of this "thing" the bode plot would not be a straight line.

Note: The very slight amplitude drop and phase shift at the right end of the FuelMaxx and resistor plots are due to stray capacitance in the micro-clip test leads I used for this "quicky" test--you can see that both the FuelMaxx and 22k resistor have the same curves. The shift caused by just adding the 0.005μF cap is far greater.

I plan on breaking apart the potting to see if I can get a view of what's in there, however this will likely be a somewhat destructive process--we'll see what we can see...