A member of one of the Mustang forums asked me "What are your thoughts about performance plugs, wires, and coils? These are usually relatively cheap and obviously bolt-on. Advertisements always emphasize the gains achieved with these items."

This was my response...

Simple answer, they are lying to you.

Regarding spark plugs let us first examine what motivation Ford would have to choose to install plain ol' single electrode platinum plugs, rather than some other fancy magical multi-electrode, mystical "power" plug.

Answer: They have none.

Auto makers compete vigorously to attain the highest horsepower and fuel economy ratings, and have to pay a fine to the EPA for every vehicle produced that does not meet the CAFE requirements. If spending another $50 on spark plugs could provide such miraculous increases in HP and mpg it would be pretty stupid of them to not do it, wouldn't it? Also consider that Champion has been making spark plugs for over 110 years and with the exception of a small line of multi-electrode designs for specialty applications they do not make such plugs for general automotive use. If there were a better way to make a spark plug Champion would have sorted it out by now, or bought up the technology.

So, for nearly any but the most radical naturally aspirated build, and any modest boost (< 15 psi) setup, fine wire precious metal electrode plugs are the best selection. Fine wire plugs require 40% less voltage to ionise the gap and fire, and are much less prone to fouling--that is why automakers choose them. I run Champion stk# 3401 plugs in my '03 GT which turned out 262/305 rwHP/lb-ft with only modest bolts-ons and a highly optimised tune.

A long long time ago, in a Galaxy far away (a 1964 Ford Galaxy) stock ignition coils sucked big time when combined with almost any sort of engine performance upgrade; as did the distributor, condenser and wires--and an entire industry was built around this, by companies like Accel, Mallory, MSD and others, to fill the gap (no pun intended).

Back then the grandiose claims made by aftermarket ignition component makers/vendors were actually and very largely true. But then along came emissions standards and the automakers could no longer afford to deliver vehicles with such poor ignition systems; and meet the standards. For a while the aftermarket stuff was often still superior, however as time went by and OEM distributorless wasted spark and COP ignition systems became commonplace the aftermarket claims became increasingly just that--claims based on something that was once true ( BTW, K&N lives on riding this same train).

Assuming that wire set/coil combination A can fire the plugs so as to initiate a solid combustion and flame-front, there is no reason to expect that wire set/coil combination B could cause engine output to increase. Beyond that distributorless technology (coil packs and long plug wires) for over the road vehicles are a far less than state-of-the-art systems. If I were doing a serious street build on a '96 to '98 Mustang with the EDIS system I would look into a COP conversion.

Now there is something serious to discuss.

The stock COPs are universally held as being superior to aftermarket units, and my own testing of COPs donated to my project supports that position. I found no aftermarket COP that surpassed the stock units in either energy output or durability, in fact a number of the aftermarket COPs were less durable: 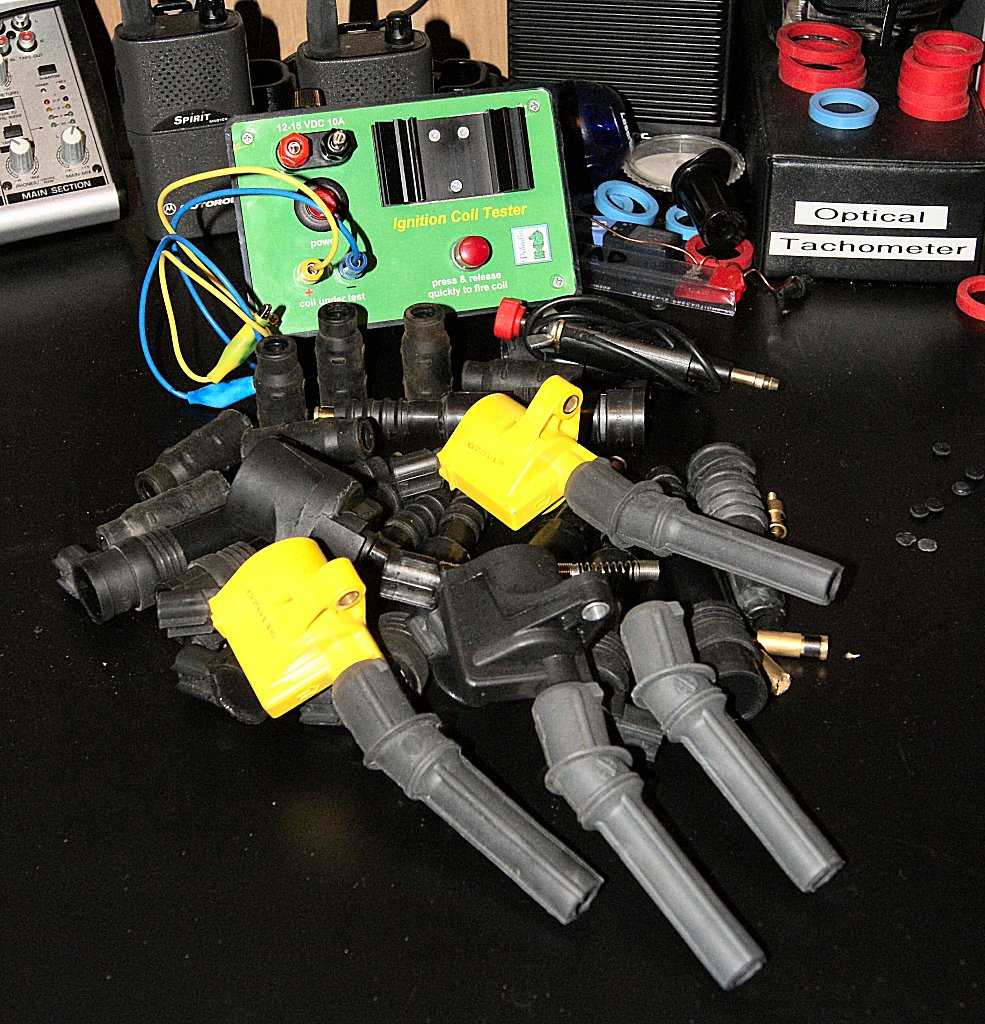 The COP Tester shown is my own creation and uses a manually triggered MOSFET ignition driver firing circuit very similar to that in the PCM. The COP's output is connected to an adjustable air gap tester, and its output gauged by how large an air gap it can fire across:

Here is an Accel COP set up for testing: 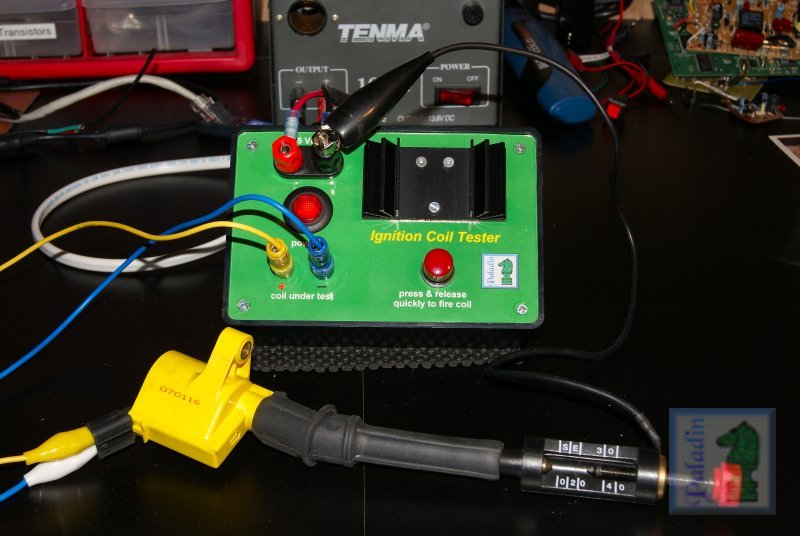 Here are the results of testing four Accel COPs against four stock coils: 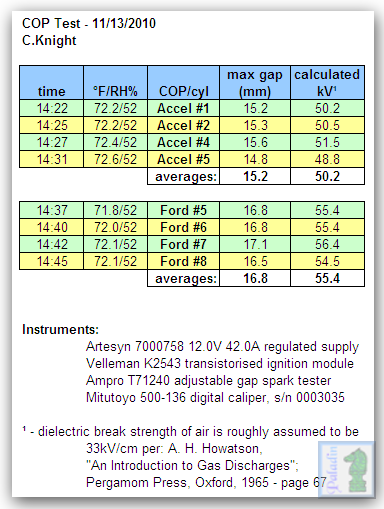 If the rapid sequential full charge dump firing shown in the video were performed 10 to 12 times the COP will become so hot you could not hold it in your hand; if full charge dump is fired 20 times rapidly smoke will start to come from the COP and it will have been significantly compromised. 25+ such firings will burn the COP out completely. At some number of such firing this is true for any COP, from any maker. I did find that in general the stock COPs were more resistant to this treatment, some requiring as many as 30 rapid cycle firings to burn them out.

This is a real torture test as the COPs are not engineered or intended to ever do this. In normal use, making a spark across a piddly little 1.4 mm (0.054"), less than 5% of the COPs full charge is dissipated. Here's are oscilloscope traces of an Accel COP firing across a 0.054" and 15 mm gaps: 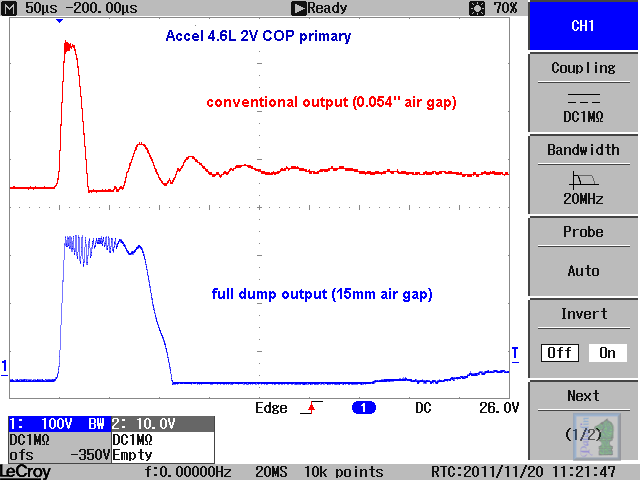 Note: I more aggressively and destructively tested the Accel COPs because a contributor sent me a set of eight (with three already burned out) and I have my own set of eight in which four had burned out over a five week period, with between 20k and 25k miles on them.

COPs have tremendous reserve capacity, so much that it is used at idle and up to 1200 rpm or so to fire each plug 3 times in rapid succession to provide a smoother burn and improve emissions. Here is what this looks like on an oscilloscope:

The high initial spike represents the coil's stored energy ionising the spark plug gap, this is a voltage spike of 16 to 20 kV (off the top of the trace). The short downward sloping line after the ionisation event is the plug actually firing at a sustained voltage of 4 to 6 kV. The triple firings are clearly seen at 1.33 ms intervals.

The torture test also reveals why COPs tend to fail soon after washing an engine or a coolant leak has flooded the plug wells. The COPs will be have been compromised by being subjected to near and full capacity discharges. Grossly worn plugs with large gaps, and boots that are arcing through can also weaken COPs; I recommend changing the COP boots at 100k miles.

So there you have it--see what happens when you ask a retired engineer a simple question?