A couple days ago I visited Harbor Freight to buy a 20A automotive fuse tester, which I did get, however my eye also fell on this device: 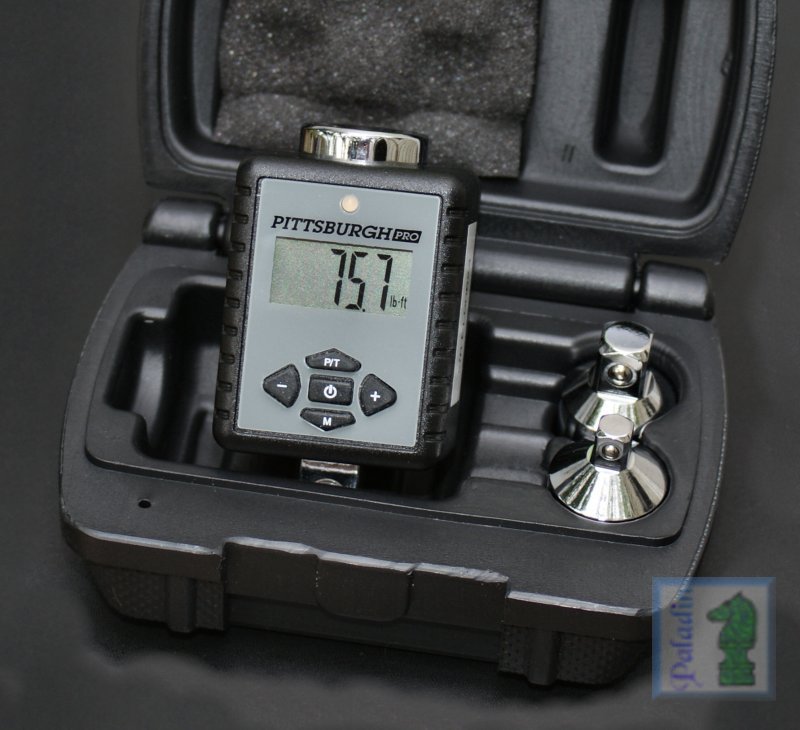 It is their model 68283 Digital Torque Adapter and is one heck of a value for $39.99 (as of 1/30/2012). It uses strain gauge technology to measure deformation of the spindle--which is very much a precision made 1/2" square drive 3 inch extension--under applied torque, and then calculates and displays that torque using the known characteristics of the spindle and magnitude of the distortion. It's claimed accuracy is ±2.0% (it says ±4.0% in the online catalog, but ±2.0% in the manual), however per the calibration sheet and my own tests it is far more accurate than that specification--here is the supplied calibration sheet for my unit, s/n EL00624:

Note: This is intended to be used ONLY with hand tool input--NOT powered wrenches, torque or otherwise.

Using the 60 pound weight (113.75 lb-ft actual) the readout was 113.9 for a +0.13% error--I was frankly quite surprised to find that my simple dead weight tests so well correlated to the calibration sheet.

The unit can be set to record the peak torque encountered, or to "trace" (track we Yanks would say) the applied torque (press the P/T button to toggle between the modes). In peak mode it saves the last 50 readings, they may be recalled by pressing the M button. Contrary to the way it is phrased in the manual the last peak torque value is the first displayed when the M button is pressed, an indicator label P01 is displayed briefly then the recorded torque. Pressing the M button again proceeds to P02, etc.

It can display the applied torque in units of lb-ft, kg-m and N-m. The display unit is set by simultaneously pressing the M and P/T keys, repeatedly, until the desired unit is displayed.

Because of this level of accuracy, and that as a strain gauge based device such accuracy will be well maintained unless severely overloaded (the manual says that at 125% of full scale the LED will flash red and the alarm will beep), the instrument can be used as a standard against which to calibrate mechanical torque wrenches. Testing my HF 3/8" drive wrench I found it to easily meet its ±4/0% spec, as did my 1/2" drive MAC beam wrench and a very old Snap-On "clicker" I have had for years. When testing a 1/2" drive HF clicker I have used for at least 10 years I found it to be delivering 5 to 10 lb-ft more than its setting across its range. A couple twists of the calibration screw and retesting using the digital device brought it into spec.

Also, finding that it could measure and record peak torque values in the 4 to 29 lb-ft range, I was forced to use it to check the Torque Limiting Spark Plug Socket I reported on in the Fall. At that time I had checked its accuracy using a well-calibrated 1/4" drive and found it to release at 14.2 to 14.8 lb-ft when torque was applied in a rather slow buildup as I was pulling slowly and listening for the "click". This made the dynamic friction of internal ramp and ball more of a factor in its limiting the torque applied to the plug.

Using the digital adapter to record peak torque I was able to better simulate the rotational speed at which a mechanic might use the torque limiting socket. This revealed that with a normal sort of speed the limiter produced 14.2 to 14.5 lb-ft at the plug, and that with a quicker application (still within what a mechanic might actually do) this dropped 13.5 to 13.7 lb-ft. As most, maybe all, plug manufacturers recommend 13 to 15 lb-ft for tapered seat 14 mm plugs this entirely validates the socket's value.

My only negative comment is that the buttons are a bit small for my fat old arthritic fingers, but I can live with that...

Bottom line: I highly recommend the Harbor Freight Digital Torque Adapter, at $40 it is a steal!!!