This is a thingy I put together a while back, a Rear Axle Ratio Guesstimator.

To use it just get going 40 to 50 mph in 4th gear (3rd for autos) and make note of the selected speed and rpm at that speed; then plug the numbers into the calculator. If you have non-stock rear tires that are of a different outside diameter than stock enter the tire size too. 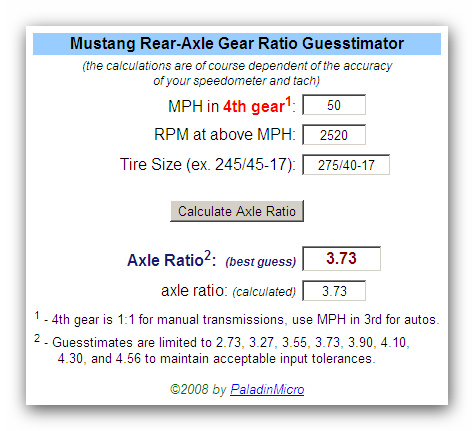 It uses a fuzzy math algorithm, meaning that the input values for speed and rpm do not have to be dead on. It has proven to be pretty accurate...

I have received a number of PMs over the years asking me about short throw shifters, and the MGW shifter in particular--here is my response to the most recent. Aided by my chronic battle with insomnia it got rather verbose so I thought I'd post it for other's benefit.

"I just joined here and have been reading up on this MGW shifter for my car.(04 GT) this is my first stick car so i dont know a good shifter from a bad one.

would you mind explaining what makes the stock one suck and the mgw so much better? all the threads i see about it you seem to chime in with solid info so it seems you know alot about sticks in general.

thanks for any info."

The OEM shifter was designed to (1) minimise NVH (Noise, Vibration, and Harshness), and (2) be as cheap as possible to manufacture.

The first goal, NVH, was heavily (and overly IMHO) influenced by the Mustang V8's popularity and the general "pussification" of the motoring public that resulted in owner complaints regarding stiff and notchy shifting, and interior heat and noise.

To meet goal 1 there are rubber isolators between the shift knob and the business end of the OEM shift lever; resulting in a rubbery, vague, monkey-motion shifting experience--as compared to real sports and racing cars in which the goal to provide precise shifting takes precedence over any other consideration.

Goal 2 was met by fabricating the shifter from crimped together pressed steel plates, with a sloppy fitting pivot ball, and a rather long throw and wimpy centering springs (part of the afore-mentioned pussification). 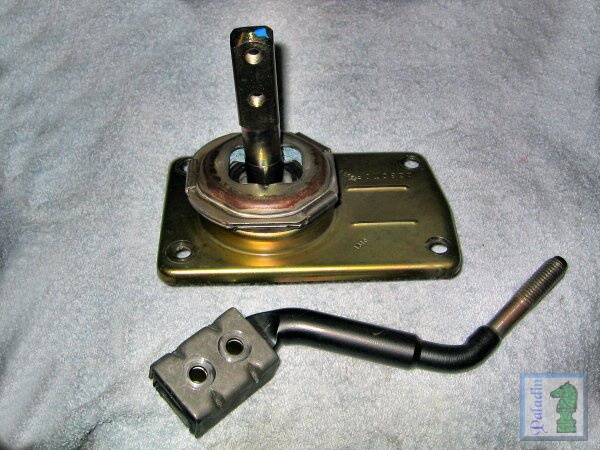 The after market responded with re-engineered versions of the stock design, made of better materials and machined parts, but still basically the same design as the OEM shift assembly--with the fulcrum point moved upward and a shorter lever to reduce the throw.

The Pro-50 (pronounced "pro five-oh") and Steeda Tri-Ax are examples of this genre.

The Steeda Tri-Ax shifter (the Pro-50 is similar but a bit more crudely machined): 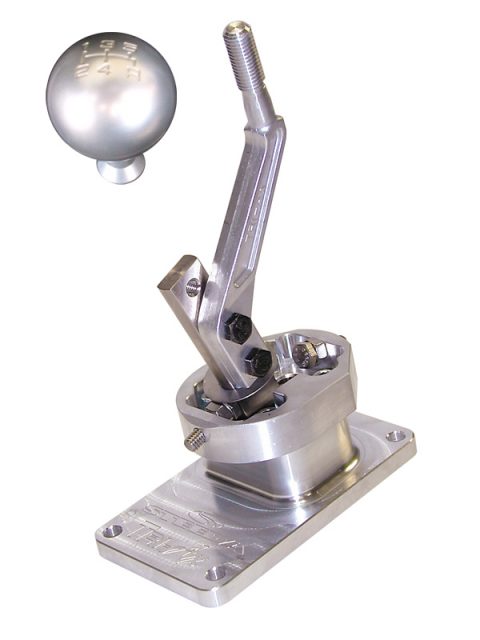 MGW entered the market with a completely redesigned unit, sharing only the fact that it let's you shift gears with the OEM; and that the fulcrum has been raised and lever shortened as with the OEM style shifters listed above. 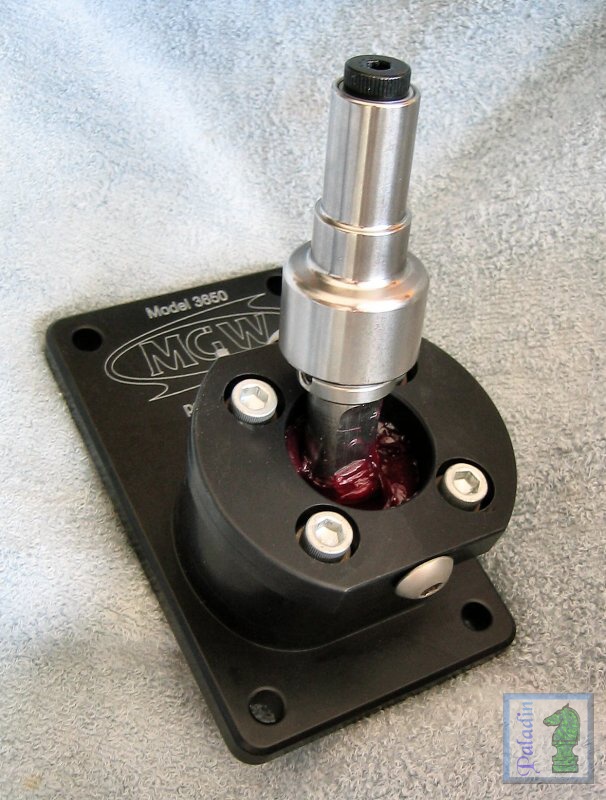 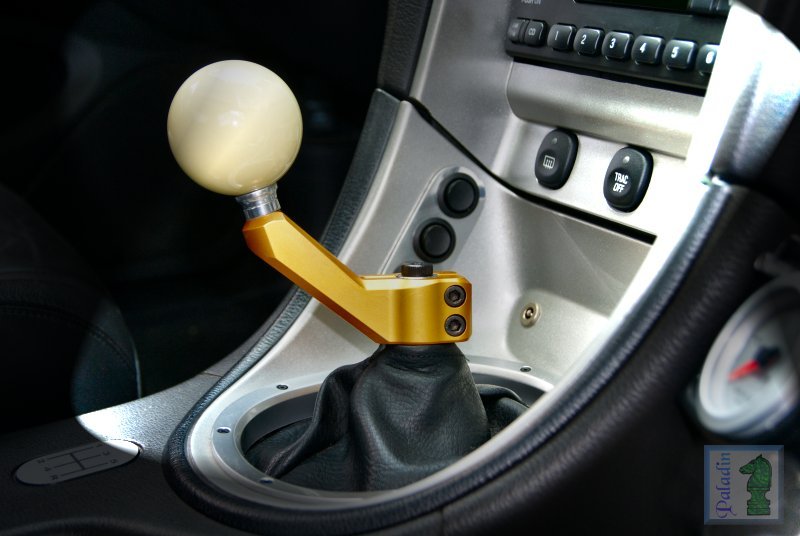 A Word of Caution:

After market shifters, all of them, were designed to first be more precise (less slop and stiffer centering springs) and shorten the shift "throw". NVH considerations were trivial or non-existent.

Therefore all after market shifters will be noisier, notchier¹, hotter, and require more effort to shift gears²--just like real sports/race cars.

There are those who claim that the MGW is notchier and requires more effort as compared to the Pro-50 and Tri-Ax. I have never driven a car with either of those, however as the MGW has the shortest throw of them all it may very well be true.

I have further shortened the throw on mine by taking 3/4" or so off of the lever and the first thing my wife gripes about when she drives my car is how hard it shifts (and the pretty stiff after market clutch)--I never notice it, or the clutch, because that's how high-performance cars are.

If you think you may have a problem with this then you may want to see if you can arrange to drive a car with an after market shifter. As to the MGW, I would not trade mine for anything less than a 2004 Cobra, or maybe a mid-60's Jaguar XKE...

¹ - Notchiness is generated by the transmission's shift rod spring loaded ball and notch detents. A short throw shifter will make the locking action of the detents more noticable because the reduction in mechanical advantage, from the shift knob to the shift rods needed to make the throw shorter, will amplify the force required to overcome the detents' locking action.

² - That a short throw shifter will require more effort to shift is just fundamental mechanical principle. It takes a fixed amount of force and motion to actually move the transmission's shift rods, if you make the lever shorter (than stock, to shorten the "throw") then it will require less motion and more force (than stock) to move the shift rods. There is no escaping this and anyone who tells you otherwise is an ass.

As the range of motion required to move the shift rods is fixed there are only two ways to decrease the "throw" of the operatiing knob. You can raise the fulcrum and lengthen the lower end of the lever, or shorten the upper end of the lever, or a combination of the two as is done by most after market shifters. 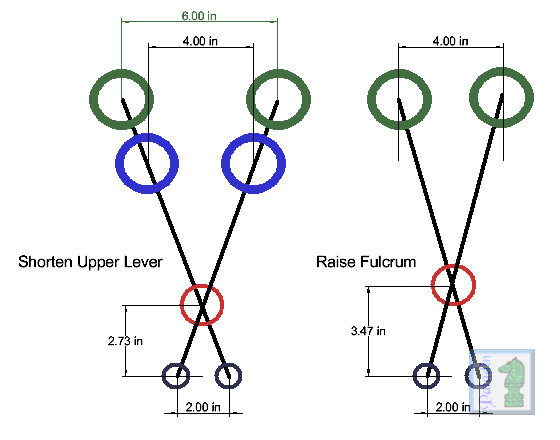 I received a followup question asking why a strong centering spring is desireable.

"the only other thing i was wondering about was why you need good centering springs. i would think the less force against you pushing the shifter (into say reverse) the better for ease of shifting."

The strong centering springs work with you to improve shifting by minimising the need for you to "horse" the shift lever into gear, with the effect of a stronger spring being of most benefit in the 2-3 upshift..

Upshifting with a worthwhile centering spring:

The 5-4 and 4-3 downshifts benefit from a strong centering spring also, as the spring will force/keep the lever in the 3-4 path, in the center of the pattern.

With a weak or no centering spring the 2-3 upshift and 5-4 downshift would require that you move the lever sideways through the neutral gate, and get it centered on the 3-4 center path, and then move it forward or backward into gear--this is what mis-shifts are made of....