The Delta Force Tuning Special Forces (SF) tuning system is intended as competition for the various hand held tuners offered by other manufacturers; and it does that quite nicely by offering much more flexibility, the ability to have five tunes loaded into the interface, and to tune two vehicles at any point in time--with no limitations as to how many times you can change vehicles.

There are three Windows® based applications that make up the system:

I do not intend this to be, nor is it, comprehensive documentation of the SF system. It is rather an overview of what Special Forces is and what it can do; with the primary focus on the Special Forces editor. SF is a great entry level tuning system, far superior to any of the hand held systems in its price range, however it is important to understand that it is just that--an entry level system. Please read the Final Comments section below for more.

Special Forces, unlike the hand helds, creates complete customised tunes based upon your responses to a series of questions and selections related to your vehicle's configuration. Your input is processed and applied to your car's stock tune to create a base custom tune, made with known (and safe) performance improvements.

The base tune settings (most, not all, see my SFScrape.exe application for more about this) are saved to an encrypted file that can be reloaded into the SF editor and fine tuned. Fine tuning consists of applying modifiers to the timing and fueling settings.

Any number of base and "fine tuned" tunes may be created, as stated above any five of these may be loaded/reloaded/overwritten into the interface and be available for flashing to the PCM.

How does it work?

This is the initial screen, you elect to either open an exisitng, or create a new, tune; 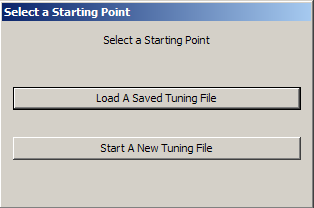 Here I have elected to create a new tune, and have entered the Computer Box Code; 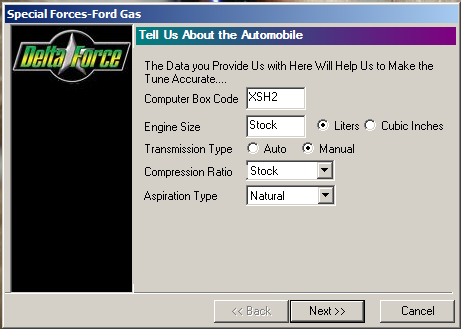 The box code is obtained from your stock tune, which when downloaded from your car into the DF interface will be saved to a folder named Original Files, located in the Delta Force Tuning data folder. The filename will be in the format sssss.bbbb.pcm where sssss is the tune's strategy code and bbbb is the box code.

You would make the other selections according to your car's configuration.

The next screen let's you describe your fuel system;

The selections are self explanatory, with many/most common values available in the drop down lists.

Next are MAF related selections, again most common devices will be available from the drop-downs; 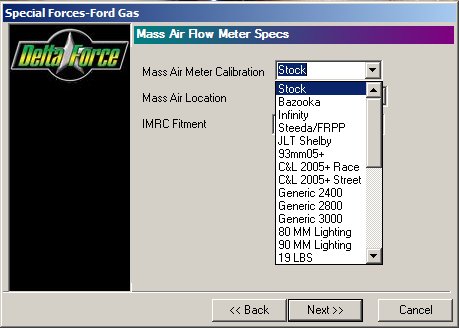 Now you will define your exhaust and ignition configuration; 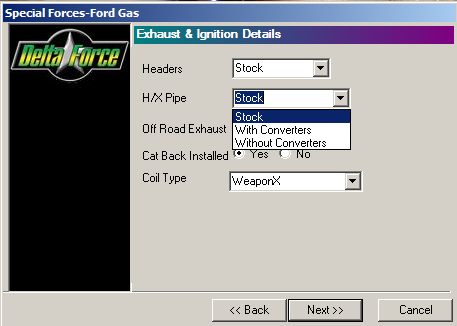 And in the last a number of general modifications and settings; 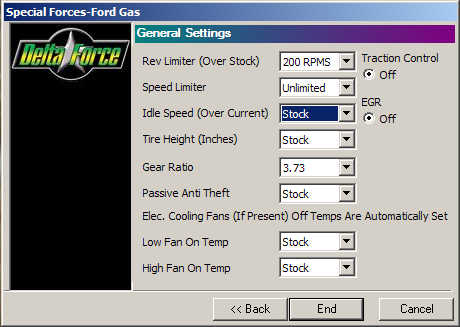 Clicking [End] will open a dialog asking that you provide a name for the newly created base tune; 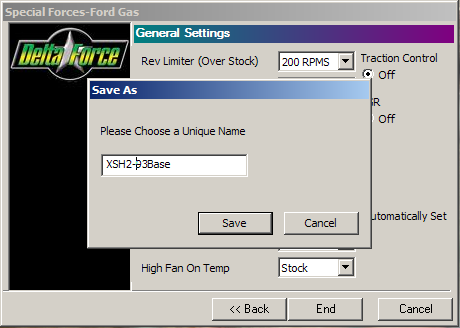 Enter a name for the tune and click [Save], SF will let you know the tune has been saved, and exit.

That's it your new custom base tune has been created!

Once a base tune has been defined you can re-open it for fine tuning.

To do so, launch Special Forces and elect to Load a Saved Tuning File from the initial screen (see above), a typical Windows file open dialog will be opened; 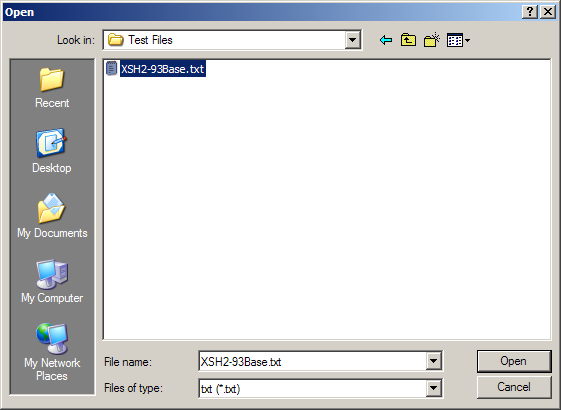 Select the tune you wish to edit and click [Open].

The Tell Us About the Automobile dialog, and all the others shown above will be availablle, and in addition you will have access to the fine tuning page; 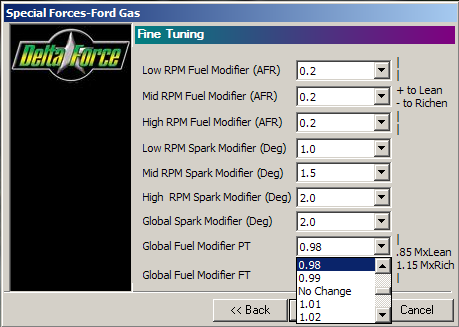 Here you can select modifying values for fueling and ignition timing. When you have made these selections click [End], you will be asked for a name for the tune--use a different name that describes the tune; 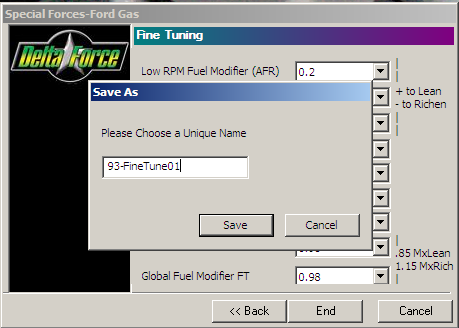 That's it, click [Save] and you will have created and stored a fully customised tune. The next steps would be to use the MultiLoader utility to save the tune to the USB connected OBD2 interface, and then connect the interface to your car's OBD2 port and flash the tune. I am not going to document that here as full instructions are included in the package you will receive.

What about automatic transmissions, forced induction, and nitrous?

The options for automatic transmission tuning are comprehensive; 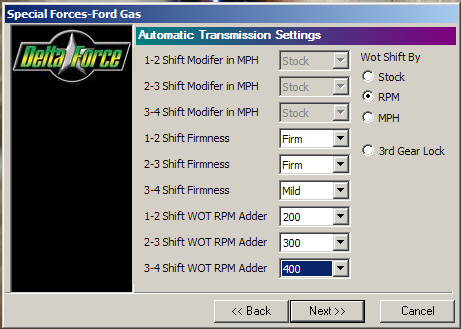 If you are running forced induction or nitrous (one or the other, not both) these options will be available; 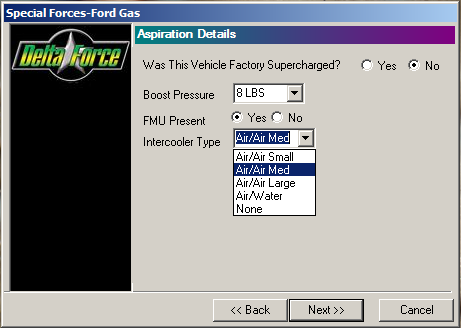 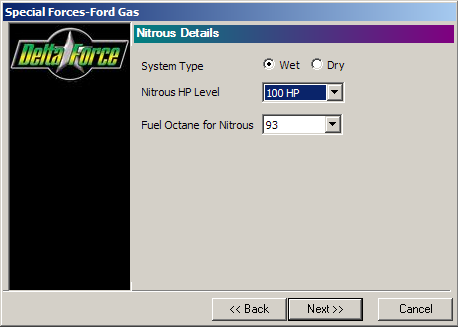 Special Forces excels at what it was designed to do, this being a superior alternative to the hand held systems in its price range, however like them it is also an entry level system. What this means is that it can provide good tunes for what would be considered "bolt-on" engines, with that classification including packaged supercharger, turbo, and nitrous kits, assembled by the many reputable and knowledgable after market performance vendors.

So if you have a heavily modifed engine, or are one of those like myself that wants complete access and control of your engine's tuning, I strongly recommend that you skip over Special Forces and purchase the Commando system right up front.

Commando comes with the Special Forces editor so that you can easily create tweaked initial tunes and then load those tunes into Commando for full access to every one of the tune file's scalar values, tables, and functions.

Commando has no competition in its price range.

I recently purchased a Sony Alpha α230 digital SLR, got it on sale at Walmart for $300! I had done some research on DSLRs and when I found that the Sony Alpha series used the same lens mount as the Minolta Maxxum film cameras my interest in Sony's offerings was pretty much cemented in place as I had a number of those lenses in the closet.

One item I did look to purchased however was a spare battery. They are $60 retail, $55 at WallyWorld, but piece of cake says I, log on to eBay and find a reasonably priced after market unit that would ship from the US. I bought one for $20 with free shipping, here's where the problems started...

It turns out that the Alpha +30 models (the α230/330/380 series) have a Battery Detector module that communicates with the battery via a one-wire serial protocol--this is claimed to be used to monitor state of charge, internal temperature and other parameters.

Here are the schematics from the service manual showing this connection and the Battery Detector module: 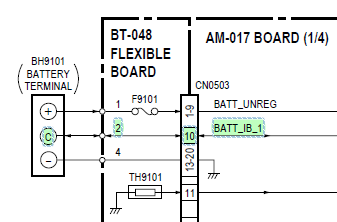 If the battery does not support this communication the camera will display "Incompatible Battery. Use correct model." and shut down. The first time you insert an incompatible battery the camera will appear to power-up correctly, but then display the error message and shut down when you attempt to take a photo or change a setting. Subsequent power-ups (with removing/reinserting the battery) will go directly to the error message and shutdown.

I am not aware of any after market batteries that support this communication, so ask questions before you buy and be prepared to have vague and "it should" sort of responses when you ask "Will this battery work with a Sony Alpha α230/330/380 camera?".