This is a wonderful explanation of how quantitative easing works--I.e. how we are getting screwed over by the Government's out-of-control spending binge.

I need to get one thing out of the way right up front--WOW!!!

Got 'em yesterday and installed this morning--I put 50 miles on them just now. Assuming the wear is reasonable and I do not experience the "rolling over" of the sliders that has been reported, I have got to place these on my Must Have list of mods. As has been reported by others the rate of acceleration from a stop does feel as though 100cc has been added to the engine, and at high speeds the reduction in engine speed makes things quite enjoyable. I did experienced one very minor downside at higher speeds, more about that below.

On initial take off with moderate to heavy throttle the engine will rev to 6k and as the CVT does it's thing the little beast accelerates quite briskly; noticably faster than with the OEM rollers. Keep the throttle rolled on 'til 55 (actual, 60 indicated) and then roll it back just a bit--the CVT behaves as though it was an automatic overdrive automobile tranny, the revs drop immediately to less than 5k while you settle in at 55mph or so. You can get that added 1k engine speed back by twisting the grip and get some decent 55 to 75 acceleration.

Here are the numbers, the upper table is with the OEM rollers, the lower with the sliders:

As indicated in footnote 1, I did not get a useful observation at 30mph with the sliders. Their cam-like profile makes RPM versus mph quite variable and load dependent at low vehicle speeds--this is a good thing though, making the bike much more controllable and at the same time more responsive at those lower speeds.

The downside I mentioned earlier is that top speed has been affected by the sliders. Because of the 11% higher effective CVT gearing (numerically lower) there is also 11% less torque at the rear wheel to push the bike. On my K3 this brought the usable top speed down from a solid 90 (real, 100 on the "clock") to 82 or so (again real mph). I got it to 85 per the GPS, but it took a good 20 to 25 seconds at WOT to get that last 3mph.

The good new is that it holds a solid 75 at 6650RPM (vs. 7500 with the OEM rollers) with room to spare; I have GIvi windscreen coming in on Tuesday, it will be interesting to see what impact that has.

As others have very well documented the installation process I only clicked a few pics, here's a shot of the rollers as removed:

Something that surprised me is that the working surface is smoother than it was when I pulled them 500 miles or so ago to break the sharp edges on the drive plate.

However after running just 500 miles with the plate fingers radiused 1/64" or so they seem to have smoothed out. Another observation (unscientific using the thumbnail test) is that the synthetic used stock rollers is much softer than the sliders. With a good force I can "catch" my thumbnail on the rollers; no way on the sliders, which I assume to be latest production as they came straight from Union Material.

Here's a closeup of one that I cleaned up, it is much smoother that it was just 500 miles ago: 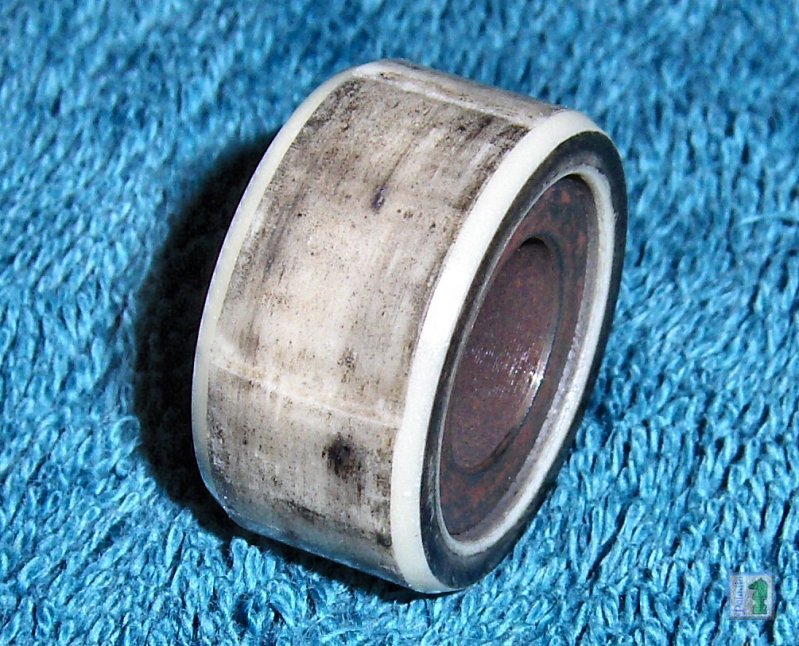 Before installing the sliders I took the time to hone the plate fingers with a 320m grit aluminum oxide stone--when the 2007 plate I have ordered shows up in a week or so I will get some photos of how the sliders have fared, that should be another 350 miles or so from where I am now.

So there it is, at this point I am VERY pleased with the 18g sliders. Time will of course take it's course and ultimately "tell".

After looking at various products and DIY GPS mounts I decided to make a simple bracket to piggyback on the rear master cylinder cover.

It's just a twisted up length of 1"x1/8" aluminum flat stock, sprayed with rattle-can "wrinkle" paint. I replaced the cover screws with M4 x 16mm stainless flat head socket caps. The GPS clip mount is one that had a broken inner clamping finger, Garmin had sent me replacement; I just center drilled it and used a M5 button head cap to mount it to the bracket: 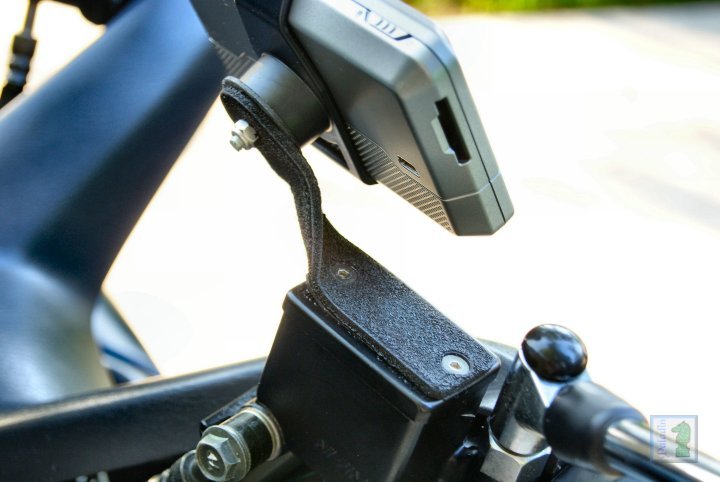 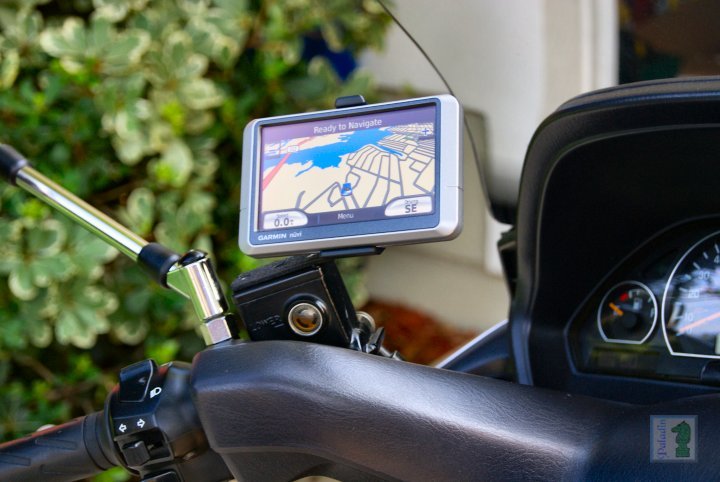 Armed with this I set out to reverse engineer the CVT ratios at various vehicle speeds with the clutch locked up. Here is what I found: 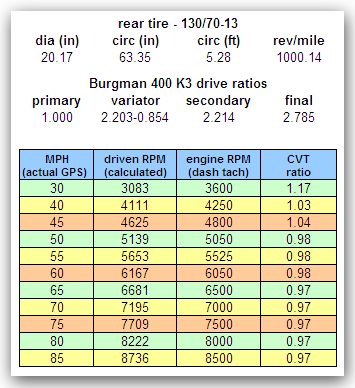 In the table I have calculated the CVT driven sheave speed for each listed vehicle speed; this is the speed in MPH divided by 60 to get miles per minute, this divided by the tire revs/mile to get the tire RPM. The tire RPM is then multiplied by the final and secondary ratios the get the driven sheave RPM.

The engine RPM is that observed on the dash tach at the indicated speed (via GPS), at a steady state speed (with a very slight headwind).

The final column shows the calculated CVT ratio, determined by dividing the engine RPM by the calculated driven sheave RPM--this represents the CVT drive ratio at the selected speed. I found it interesting that there were all very near 1:1, as this is the natural point at which drive efficiency and belt life would be optimised. 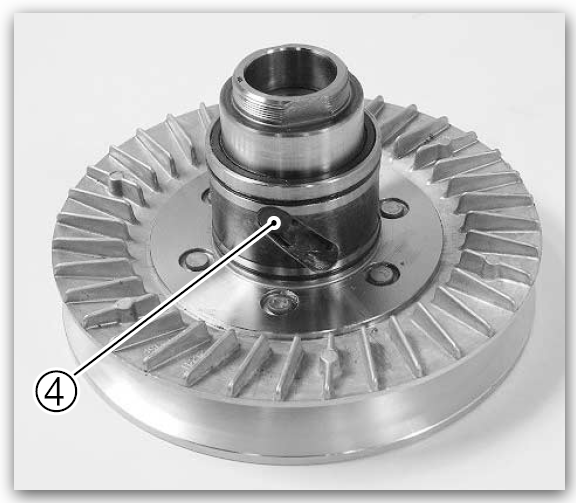 But under what conditions would this happen?

It happens when the belt slips on the fixed face but does not slip on the movable face, which has less rotational resistance unless anti-clockwise to the extreme. So under high loads/hard acceleration, when the belt slips on the fixed driven face, the cam forces the faces together increasing the pitch of the driven sheave and pulling the belt deeper into the drive sheave--against the centrifugal force of the rollers--and increasing the CVT drive ratio--numerically higher, a "lower" gear.